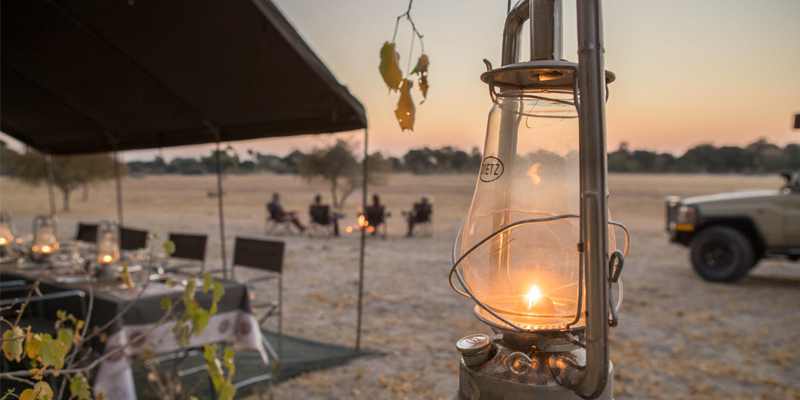 Wildlife: From the air only the larger animals are seen easily. These include large breeding herds of African elephant that live in the mopane scrub. On the open plains large herds of buffalo and lechwe can be seen and in the waterways rafts of hippopotami are a common sight. Once you land in Xakanaxa the smaller game can be found.

Habitat:Moremi lies on the eastern extremity of the Okavango Delta. Habitats here range from wide-open floodplains, marshes, lagoons, papyrus fringed channels, vast reed-beds of Miscanthus and Phragmites, woodland and savannah. As a result of the extremely variable habitat the diversity of both wildlife and birdlife is excellent.

Wildlife:Moremi is amongst the best game reserves in Africa for viewing the endangered African wild dog. Xakanaxa is home to a resident herd of several hundred buffalo whose range covers the territories of at least 4 prides of lion which may often be seen flanking the ever moving herd. Breeding herds of elephant move between their browsing areas in the mopane forests and the fresh water of the Okavango. Red lechwe are one of the more unusual antelope species and commonly found here, while the rare sitatunga antelope may be spotted from motor boat along the water-ways.

Following and early morning breakfast you take a slow drive through Moremi Game Reserve North-East towards the Khwai Community Area.

Habitat:The Manuchira Channel is known as the Khwai River at its eastern most extremity. The day’s journey follows this water course, with the track weaving from the riverside and floodplains into the mopane veld and the woodlands that make Khwai one of the most scenic areas of the Okavango. We pass the magnificent Dombo Hippo Pools in the morning stopping to enjoy the scenery and the antics of the resident hippo.

Wildlife:The western mopane veld is home to mostly breeding herds of elephant whilst the eastern reaches of Khwai is home to some impressive old bulls. The mature bulls revel in the cool waters of the Khwai and are far more approachable while drinking and bathing than the breeding herds. The river has an unusually high density of hippo as well as some huge crocodile. Leopard, cheetah, serval and lion are common predators along this route and both Xakanaxa as well as Khwai are included in the home ranges of 2 different packs of wild dog. General game includes southern giraffe, Burchell’s zebra, tessebe and red lechwe with roan and sable antelope being less common residents.

The Khwai River forms a boundary between the reserve and the community area. We spend the following two nights camping at an exclusive campsite in the community area, exploring the Khwai floodplains on game drives both during the day and at night. Exploring after dark with spotlights offers you an opportunity to experience some of the nocturnal animals that are rarely encountered during the day.  We will also have the opportunity to explore the surrounding wilderness on foot and enjoy an up close and personal encounter with Botswana’s flora and fauna. It is important to note that night drives and guided walks are not permitted within the national parks and reserves. These activities are conducted outside the boundaries of the Moremi Game Reserve in the Khwai community area.

Habitat:  We spend our time between the dry-land habitats of the lead-wood and camel-thorn woodlands and savannahs and the riverside and marshy back-waters of the Khwai. Time permitting we may visit the lagoons and waterways of Xakanaxa where the largest heronry in southern Africa exists.

Wildlife: The Khwai region boasts excellent populations of both bull elephant as well as breeding herds. Lion, leopard, serval and African wildcat are common predators of the region with wild dog and cheetah being less common. Buffalo use this area seasonally with large herds moving in during the summer rains. The swampy areas in the west are home to red lechwe. Other ungulates include tsesebe, blue wildebeest, giraffe, kudu, sable antelope, roan antelope and impala.

After breakfast we take a game-drive to the airstrip where you will be met by your charter flight back to Maun. This marks the end of your Safari.

On our travel days we have an early start, pack our bags and leave camp to have breakfast somewhere scenic. Following breakfast we gamedrive towards our next camp stopping for tea/coffee and cookies and later for a relaxing lunch under a shady grove of trees. Invariably lunch finds us within a short distance of our camp and we arrive in camp to find our crew has once again erected the camp at our new destination. There is time for a shower before afternoon tea and then it is time to begin our exploration of the area.

Please note that this is a rough outline of a travel day and events change from safari to safari depending on the distribution of game, distance between camps, conditions of the roads and the decision of your guide etc.

Travel times are a rough indication of the driving time from one camp to another and do not include time taken for breaks and wildlife viewing.

The best game viewing is the early morning and so each day begins at the first hint of dawn with a coffee and light breakfast around the fire. From here we go straight into gamedrive, walking safari or boat trip. After several hours of wildlife viewing we stop for a comfort break and have tea, coffee and cookies. Between 10 and 11 am we return to camp where there is time to freshen up with warm water in your standing basins before enjoying a sumptuous brunch consisting of fresh-baked camp bread, baked dishes and cold salads. After brunch there is time to relax, siesta, read a book, shower etc. before heading out in the late afternoon for our game-drive or boat trip. In areas outside of the National Parks we may also return to camp after dark with the use of a spotlight to look for nocturnal game.

This is a guideline as to what happens on most exploration days. The course of each days events will be determined by local conditions, distribution of wildlife and birds, safety and the decision of your guide. 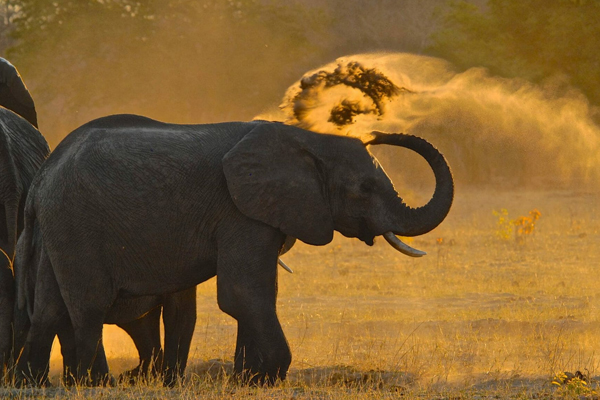 Guests on this Fly-In Safari will be treated to the highlights of a classical Namibian Safari, including the Namib Naukluft Park and Sossusvlei 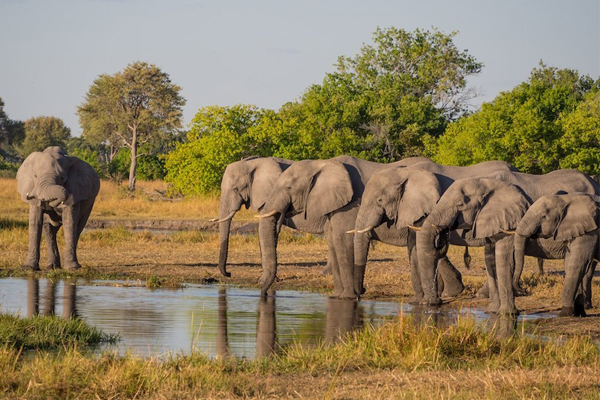 13 Days Bits of the Best Africa 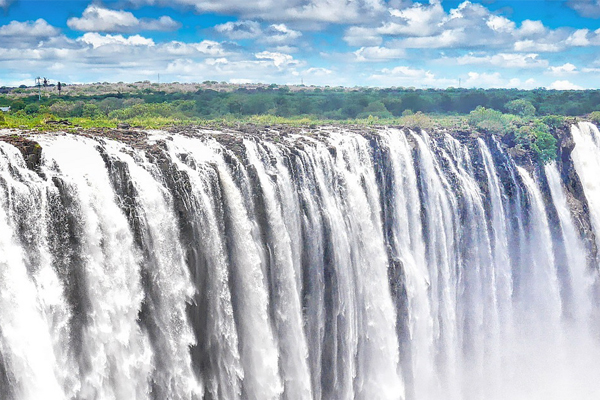 For those discerning travellers who seek the very best that Africa has to offer – First Class all the way…. From Victoria Falls, to the Okavango Delta, Kalahari Desert, and Mauritius 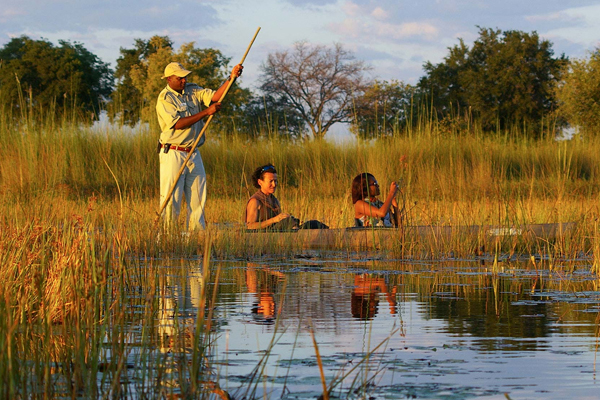 This Victoria Falls & Botswana Honeymoon Safari is ideal if you are seeking a classic African honeymoon. Romantic safari lodges in Botswana 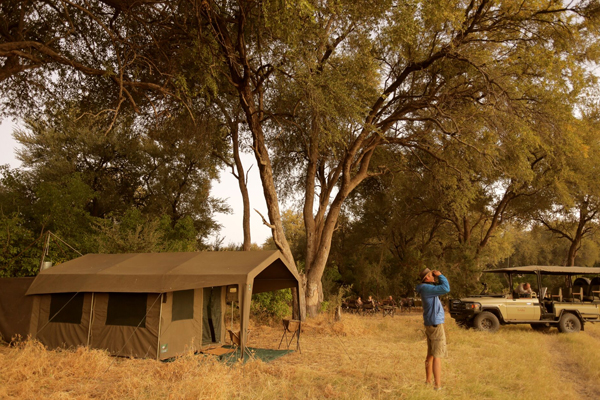 This 17 day Victoria Falls & Botswana Mobile Camping Safari Tour starts in Maun and finishes in Victoria Falls, exploring the unimaginable vastness of the pans, tranquillity of Moremi and Okavango Delta 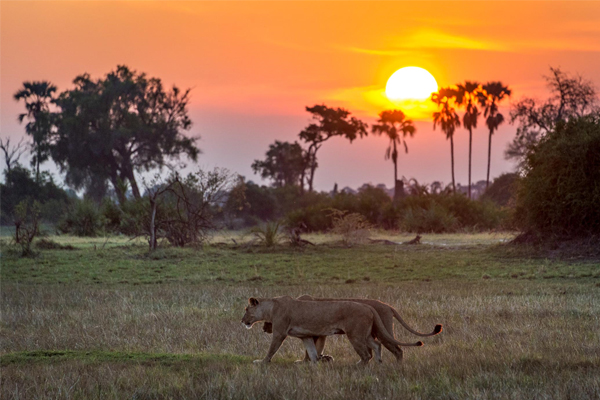 Time to view the magnificent Victoria Falls in the afternoon, enjoying sundowners from the deck on the Zambezi River 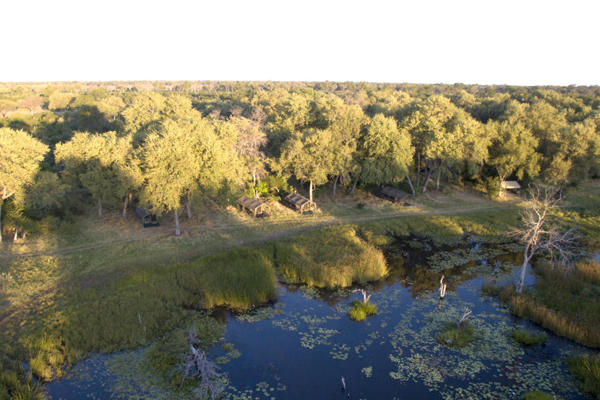 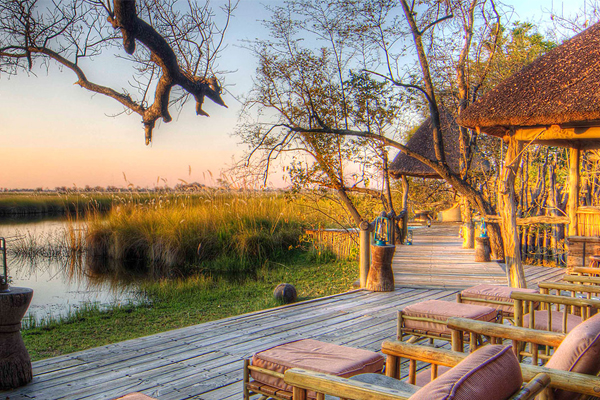 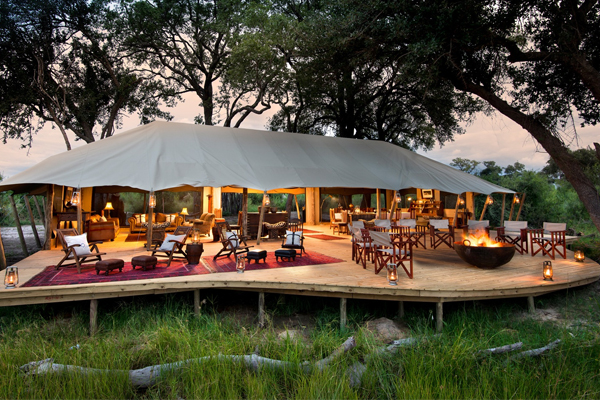 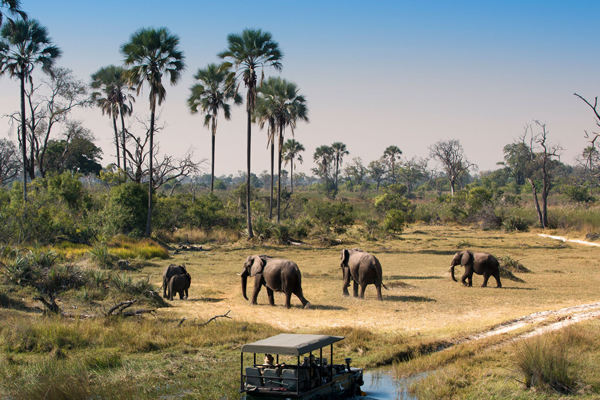 2 nights at Island of Siankaba on the banks of the Zambezi, 2 Nights at Muchenje Safari Lodge in the Chobe National Park 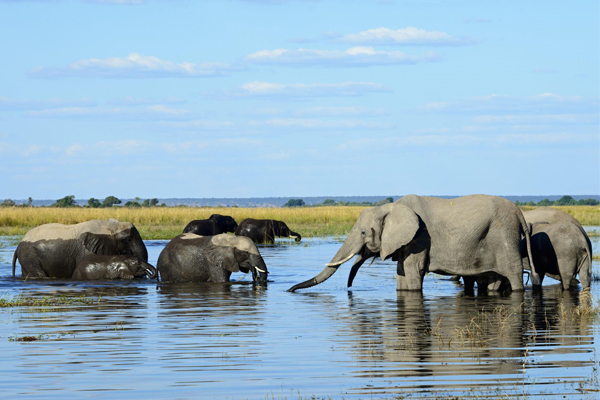 11 Days Walk on the Wild Side 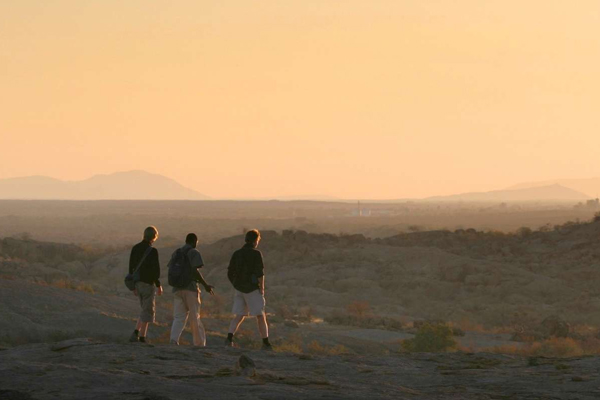 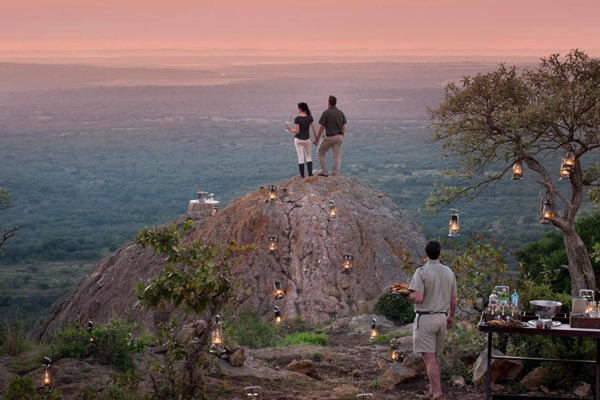 2 nights at the romantic Tongabezi Lodge on the Zambian side of the Victoria Falls,2 nights at Sandibe Safari Lodge in the Okavango Delta 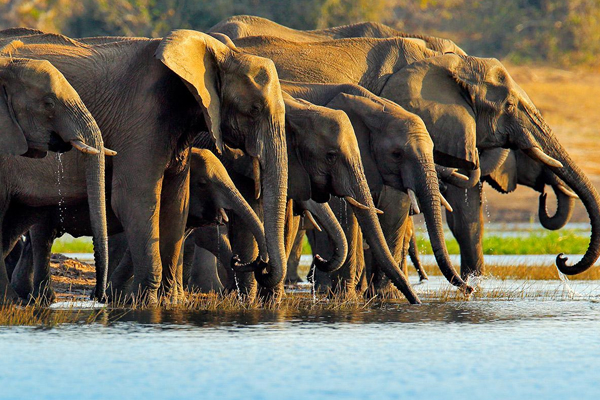 Discover an oasis in the Kalahari of Botswana, along with the magnificent and pristine Okavango Delta, the Kwando River, Chobe National Park and Victoria Falls on this diverse safari 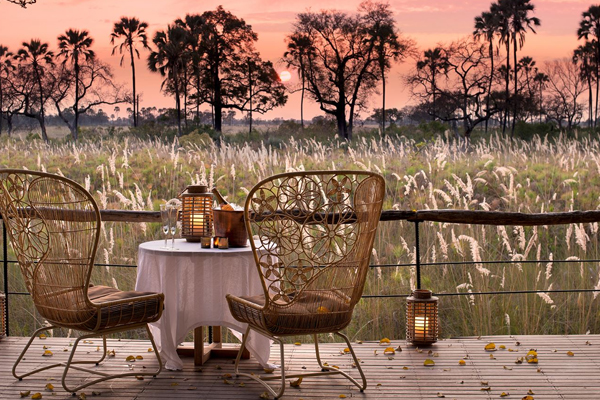 With this itinerary you will be able to view the Victoria Falls, Chobe, Northern and Southern Okavango Delta as well as the Central Kalahari (offering unique Bushman activities). 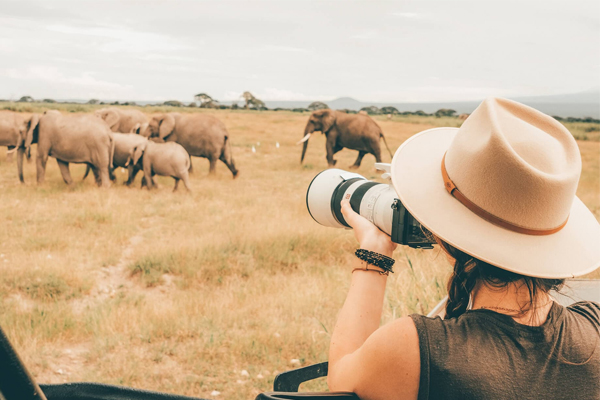 Covering the splendour of Victoria Falls, the beauty of the Chobe National Park, and a combination of water and land explorations in the famous Okavango Delta.

At Moremi Game Reserve we specialise in putting together tailor-made trips to Africa.

With your input, we'll plan all the details and come up with your perfect holiday!